Our panel curtains were starting to feel like they had a bit of friction and needed a spray of lubricant. I didn't want to spray WD-40, which is an oil, and get it on the material, so I had gone looking for a "dry lubricant".

There are a couple of different ones. The two I tried were dry graphite and dry wax lubricants. I bought the dry-graphite from The Home Depot yesterday and tried it out. Besides turing my wall and hands black, when tried to clean up an oops, it did not work well for what I used it on.

On the other hand, today I bought DuPont Teflon Multi-Use Dry, Wax Lubricant, at Lowes. It's a dry wax lubricant.... and it worked great! I mean great! It made the panel curtain guide so well I wanted to try it on other things around the house. I tried it on one of our drawers, in the kitchen, that had been tough to open fully, and it pulled right out. It was awesome. I had gone a little crazy with it and Tim had to stop me cause the house started to stick with it. 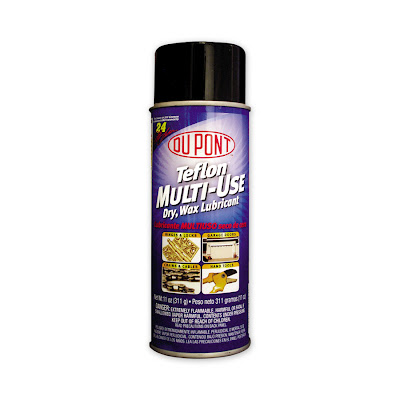 First snowfall of the year

This morning as I was getting ready for work and had seen that it snowed last night. The first snowfall is always so pretty to me... especially when it's the big fluffy kind that sticks to everything. It makes everything always look so peaceful.

As I looked out the kitchen window this afternoon I noticed that we were being invaded by a turkey convoy. Tim and I tried to sneak some pics and they ran for cover. I managed to snap one though the window. Other than a bit of reflection it's a descent image of our turkey invasion.

I had gotten a call from Tim, this afternoon, that the crew from Sam Long's Landscape was there and were starting on laying out the "crusher run" gravel. We have a relationship with them through doing our grading and seeding of the front yard, in which we were very happy with. Next year they'll be doing our backyard grading as well.

Unfortunately we hadn't finished preparing for their arrive and Tim had to move a bunch of things behind the garage by himself. He said it was looking really nice though. They came with a small rolling machine and plate compactors to flatten everything out and make it a nice surface.

When I came home it was pleasant to drive into the driveway onto a nice smooth surface. It looks so different and doesn't have that construction zone look anymore. I loved it. It's been a long time coming.

In anticipation of getting a layer of gravel over the driveway, I'm raised up some of the edge barriers that are really low. I also installed more edging around the circular driveway that I had been putting off.

One of the projects I wanted done this year was to get a layer of nicer gravel over the driveway. Currently the driveway consists of the base gravel that has up to 2 inch rocks. This makes for a crapy walking surface as well as an awful surface to shovel and snow blow.

Today I was actual home sick, which worked out cause we had Jim come over and do an estimate for gravel. He's from the landscape company who had constructed our driveway and graded our front yard last year. We have a good relationship with them and next year they'll be grading our backyard. He said if all works out, we'll have it done in the beginning of November.

We're getting a gravel that is called "Crusher Run", decomposed limestone or DGA (dense grade aggregate). It's a compacting gravel that is used under paved roads. It compacts to almost a solid cement-like surface because of small gravel mixed with larger gravel.
Posted by Kris at 10:10 PM No comments:

Before getting to work today on finishing this years Pavestone project, we needed to get some more crushed limestone gravel. After that I got right to work. I finished laying the last Plaza Paver about 3pm or so. I started sweeping the sand in the joints just as my Mom pulled up for a surprise visit to lend a hand. She helped me sweep the rest in between the pavers.


After we finished with the sand, she helped me removed the brick colored cinder blocks in the near by shrub bed and raise them up by adding more gravel. One of the things I'd like to happen before the snow hits is a finer coat of gravel on the driveway. The cider block height needs to be raised in anticipation for that.


While I was at it, I also put our pumpkins out on display on our front step.
One we got from Tim's parents, the other was a gift from my manager John. I've got the coolest boss ever..... he surprised our team by having us carve pumpkins in the conference room. The whole office smelled like pumpkins :)

We had 4 projects we wanted to complete this year. One was the was the deck, which is done the other 3 were landfill the backyard, more Pavestones and finer gravel for the driveway. The landfill in the backyard will have to wait, due to wetness and the other 2 we can do.

Last October we had started the Pavestone patio and walkway. This project will be ongoing as budget allows. For this year my goal was to complete the 10'x6' area in front of the window.

After getting fueled up on breakfast at my parents, we had gone to the Home Depot to pick up more Pavestone Plaza Stones. In order to make the Muster K pattern we need the Plaza Stone rectangle and square pavers. My Dad barrowed my brothers pickup truck to transport the stones.... all 225 of them. On our way back Tim and I picked up 4 buckets of crushed limestone as the base.

I got to work in the afternoon and completed about half of the area. I was moving along quite well. It was a beautiful day and I had taken advance of it until sunset.

Since we finished the decking of our deck at night I wanted to post some daytime photos of the completed decking.

We still want to build benches, install darker trim and planter boxes with Japanese Maples next year. I also want to add a triangular shade sail above it to fit in with the contemporary look. Shade sails are a fairly new trend. They're basically a large canvas draped above for shade, instead of using an umbrella or pergola.
Posted by Kris at 4:18 PM No comments:

In the morning I finished off installing the last 2 boards I could on the Level 2 (Left) Deck. The last board my Dad had to go home and rip in half on his table saw.


My Uncle Andrew came over and helped Dad cut the boards for the Level 3 deck, while I was underneath the deck screwing in the last boards on the level 2 decks. After I was done with that, my Mom and I started the decking on the level 3 Deck. After my Mom had taken a break, my Dad took over for her and helped me with the rest of the boards.

My Dad and I actually wiggled ourselves underneath to screw in the last 2 boards. There wasn't any play room, as my nose was an inch away from the joist. Unfortunately the last board my Dad had to rip smaller and go home to do. My Mom stayed with me as I stayed underneath.... cause if I came out, there's no way I'd go back under there after seeing the spider I had.... eeeee.

Tim came home at about the same time my Dad got back. He was surprised to find that we were almost done... and even more so to find that his wife was under the deck at 10pm. It was a relief to screw in that last screw and get the heck out from underneath the deck, where I had been for the last half hour.

It felt so good to have the decking done. Well... for now.... to be continued next year when we build benches and planters :)

It had gone much faster and smoother with the Invisi-Fast system. I was averaging about 10 min a board (including measuring and cutting) and installed 8 boards before my parents and my uncle came over. The rest of the deck my Mom and I had done together.... and we kicked butt installing almost all the Trex boards on the level 2 (left) deck.

While we were doing that, my Dad and Uncle Andrew was fixing an issue with the right level 2 deck. After looking at it, we realized it wasn't as square as we thought. They unscrewed all the joists, trimmed them up a bit and screwed them back into place.
Posted by Kris at 10:08 PM No comments:

Today starts my vacation week. The original goal was to have the deck done last week so I could enjoy sitting on the deck during my vacation. For some reason I didn't calculate into that equation 90 degree icky weather and waiting for shipments.

Today my goal was to finish the Trex decking on the main level deck before my best friend came over. I achieved my goal and got to show it off to her.

Today was also the first time in 2 years that we actually opened the sliding glass door. There was never a reason to open it before due to the 2 foot drop. Today we actually used it.... and got to walk out onto a deck.... yay!

Before anymore Trex boards had been installed on the deck I wanted to install the Philips Aurelle deck lights as step lighting. I was kicking myself for not doing it sooner. I wouldn't have had to go underneath the deck to install the wiring, but a least the underneath view was cool.

First though I needed to go to Home Depot and buy a 1-1/8 size spade bit as it was a size I didn't have. Then I drilled holes in the outside joists, which really are steps, and go underneath to run wiring.

I installed 6 of the Philips Aurelle lights on the main deck. They were so freakn easy to install. No stripping wires, just insert them into cool splicing connectors and presto!


In the afternoon my parents came over and helped out with installing more Trex on the main level deck. We were kicking butt and got all the way up to the corner of the main deck.

This morning We had gotten a new delivery of Trex boards, from the Home Depot, to exchange the damaged ones we had gotten in the first shipment. There were many that had been damaged, probably due to being the last that they had in stock at the time. The new boards look really nice and they're in great condition. We wished that the first batch was like this shipment.


We had gotten another delivery today.... the deck lights I had purchased. I had been looking around for step lights and found the Philips Aurelle LED Deck light kit. They're basically little tiny recessed lights.

In the morning I had also had gotten an early start and installed more boards on the main deck on my own, which reassured me that I made the right choice to get more invisi-fast fasteners for the lower decks. I really like the system and installing the Trex boards has been going very nicely.